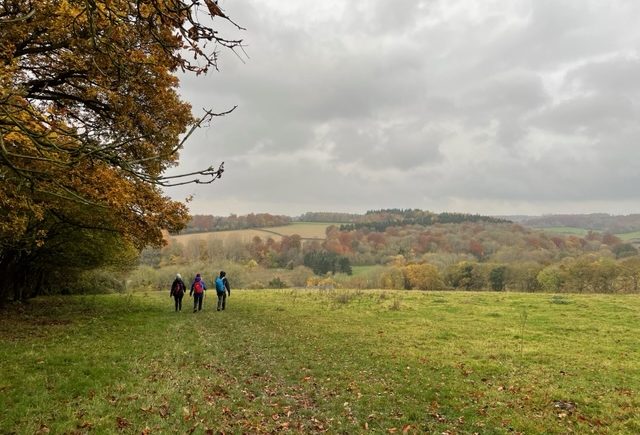 Our next walk is circular starting from and returning to Denham. It will be about 11km, going through Denham Golf Course and Colne Valley Nature Reserve and then along the Grand Union Canal before returning via some woods and the other side of the canal. We will stop for lunch at the River Garden pub in Harefield.

Saturday 23 April – Princes Risborough to Great Missenden On a mild St George’s Day, perfect for energetic walking, 7 members led by Angela gave new meaning to “up hill and down dale” in the Chilterns. Our walk from Princes Risborough to Great Missenden via The Gate pub in Bryant’s Bottom followed parts of the Chiltern Way and took in the windmill at Loosely Row, Grimm’s Ditch and Parslow’s Hillock, crossing at least three mountain ranges. We saw sheep and cows and calves and chickens and ponies and donkeys; bluebells and primroses and wild garlic and….. Excellent pub lunch, and a completed distance which at least one walker hadn’t covered on her own feet for about 20 years. We ended up in Roald Dahl Town for coffee & cake before the train home.

Saturday 12 March – West Ruislip to Northwood The day started with travel problems and unexpected rain, but by the time we all met at West Ruislip station, the sun had came out and we enjoyed a lovely walk through Bayhurst Wood Country Park and Ruislip Woods Nature Reserve, stopping for lunch at the café next to Ruislip Lido which was sparkling in the sunshine. Lots of mud and fallen trees to contend with along the way, so walking poles were well used!

Saturday 26 February – Saunderton to Princes Risborough: The sun shone for a spectacular walk along part of the Chiltern Way with stunning views, some gentle hills (and a fair amount of mud!). Red kites kept us company along the way and there was plenty of evidence of the effects of storm Eunice. After a delicious lunch in the Lions of Bledlow, we made it back to Princes Risborough station with minutes to spare!

Wednesday 5th January 2022 – Capital Ring in NE London
The day dawned bright and sunny for our first long walk of the year. We started at Crouch Hill and walked along Parkland Walk to Finsbury Park, carefully avoided the muddy banks of the New River and strolled onto Clissold Park, where we stopped for coffee. We avoided the retail opportunities in Stoke Newington and continued on through Abney Park, noting William Booth’s grave before arriving at Walthamstow Marshes where we availed of a well-positioned picnic table to have our packed lunches. We continued along the river Lee, past the Olympic Park to Hackney Wick for the train home and well-earned cups of tea.

Saturday 11th December 2021 – Wargrave to Henley
We had a good walk last Saturday from Wargrave (Berkshire) to Henley-on-Thames – approximately 8 miles. A wise decision by Angela to make an early start meant we missed the rain later in the afternoon & even had the bonus of a beautiful sunrise. The walk took us via lovely villages, part of the Chiltern Way, and through a deer park populated by rare white & fallow deer at Culham Court. Although bit muddy in parts it was mostly good walking on leafy tracks. It was even mild enough to eat our packed lunches on a bench overlooking a field which was being patrolled by a few pairs of enormous Red Kites. We made the 2pm train from Henley and were back in London before dusk – which comes so early at this time of year.

Thursday is Thank You Day on WI social media. I would like to thank our committee for organising everything this horrible twelve months, and fellow members for embracing Zoom, WhatsApp and socially distanced local outings of every kind. – Penny

I second Penny’s appreciation of our committee. You are doing a fantastic job. Thank you.  – Janet

Yes, everyone has been stellar. Thank you!!! – Patricia

I have recently joined and I have to say I am so impressed by everything and everyone. Thank you. – Linde

Thank you from me too! It’s been wonderful to have such a supportive group to help us all through this last difficult year. – Catherine

A big thank you from me too – really appreciate all the effort to keep us connected and entertained! Xx – Olivia

It is appreciated, even by the unfrequent flyers. – Janice